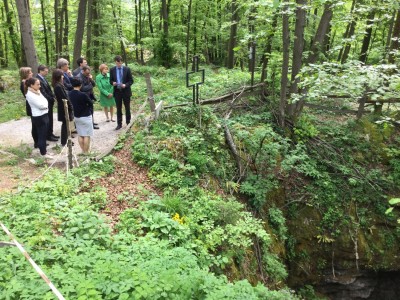 The school leadership of St. Stanislavs’s Institution visited on 4th May, 2015 the Brezar Cliff (Brezarjevo brezno) in Podutik in the vicinity of the capital city of Ljubljana. In prayer we paid respect to all victims who were murdered in this place in May and June 1945. About 800 prisoners of war who were hold captives in the concentration camp in St. Stanislav’s Institution were brutally murdered and thrown into the 75-meter deep abyss by revolutionaries at the end of WWII. As the decaying bodies soon started to contaminate water in the nearby brook, the German prisoners of war were forced to excavate the murdered and burry them in the close Kucja valley (Kucja dolina) where they still lie today. On the occasion of the 70th anniversary of these ghastly acts in the Slovene History we pray for all victims, educate the young about the horrendousness of totalitarian systems and strive to promote the Slovene national reconciliation.
Roman Globokar, Ph.D.