This Erasmus+ Project will take place from 10th – 16th April 2018, uniting 37 young astronomy enthusiasts from Bulgaria, Germany, Macedonia, France, Portugal, Scotland and Romania. Together with their teachers, they will join in some workshops, sky observation, discussions and other astronomy related challenges. You are welcome to follow the events on the school website, in the photo gallery and on FB. /Alenka Battelino, project coordinator/ 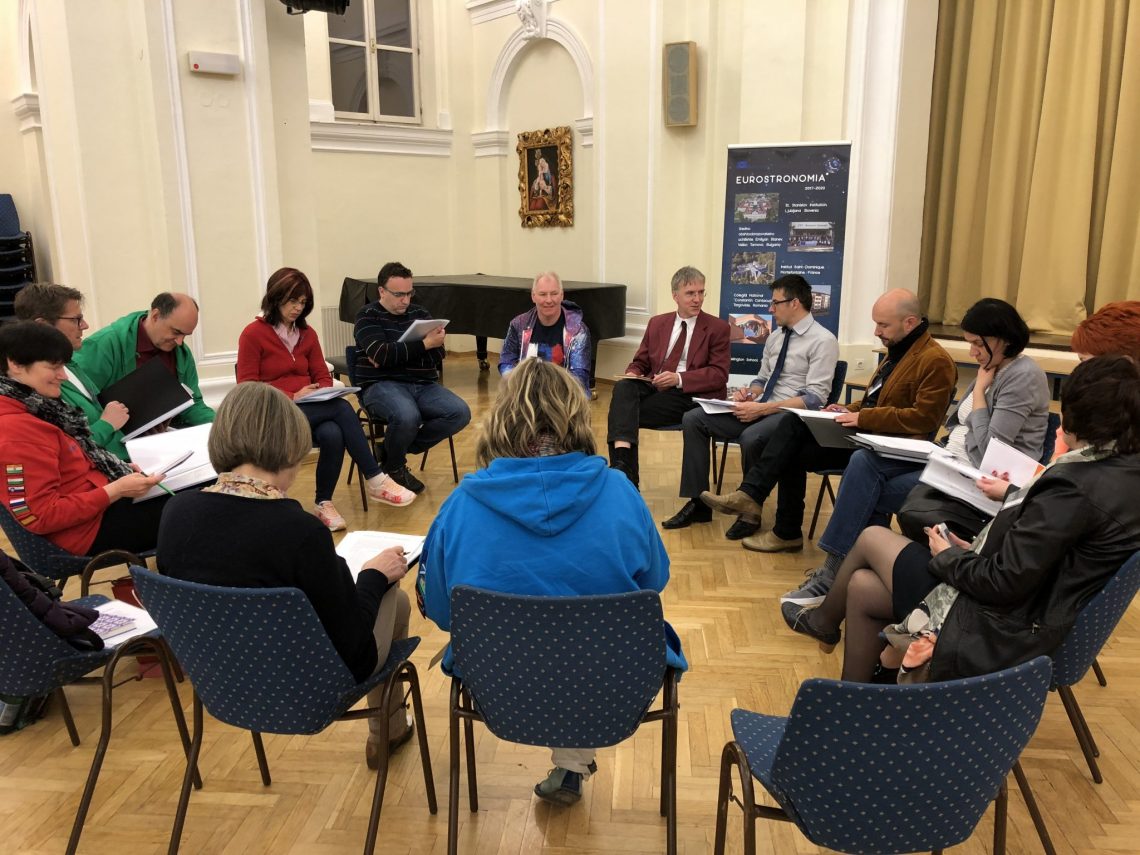 The second day arrived. For some, it started quite early, because we already gathered in Matija Tomc hall at 7.45. We were first addressed by professor Battelino and we also received a welcome from our headmaster Simon Feštanj.

After introductory words and group photoshooting, we went on a tour around St. Stanislav Institution. Our group began the path in Kregar atrium, where we viewed current exhibition. Then we continued to the resting place at the classes of first years. On our way there, we also checked the products from ancient days and the word ran about the Latin classes on our school. We proceeded to the second floor, where we got to know the science classes and exchanges, on which our school participated in last few years. Guests got really exited, when we arrived at the exhibition of quotes from Harry Potter and the works of Jane Austin. Then we carried on to the school chapel, where we told the guests about spiritual life on gymnasium. On our way to St. Stanislav Chapel, we went past the library and the photos of our senior students. In the chapel, we checked the Rupnik mosaic, and talked a bit about the history of our school. After that, we descended to the gym, which was very crowded. Somehow we managed to squeeze thru the crowd to the small gym, where we talked about sport class. A lot of our Portuguese guests were absolutely excited, when they saw our large climbing wall. When we finished our tour, we returned to the Matija Tomc Hall, where the physics teachers had a short meeting. We were too early, so we sat on the stairs before the hall and started to talk. We talked about different topics, most interesting was the climate in Portugal. Soon we got interrupted, as we had to return inside the hall. There we were presented workshops that will take place on Thursday and Friday. The enterprise contest was also presented. After the presentation the guests got divided for enterprise contest and then there followed a short concert of a mixed choir.

The guests got few minutes of free time after concert, but then they were presented the afternoon activities. At noon they departured for the city centre, where a tour around Ljubljana followed. The tour started at Prešeren Square, where students again got divided in four groups. One group first visited Križanke and National University Library, from there they went to the town hall and then carried on to the Zmajski bridge. They also visited the Ljubljana castle, to which they went on foot. After that they returned to the Prešern Square, where they did some sightseeing by themselves and were later picked up by their hosts.

I also spoke to some guests and they were willing to share their opinion on the day: Maria Martinis from Portugal: About Ljubljana I liked the most Three bridges, ice-cream is very delicious and of course, Mexican restaurant was my favourite part. It’s really beautiful city, especially the river, and it’s nice that it’s not too full of tourists. And of all day my favourite thing was meeting new people. Helene Plautin-McShane from Scotland: I found the day very interesting, and I liked the organisation and that the professors knows, what they are doing. I also liked the choir. Catherine Chambers from Scotland: I most liked the walk in the city and observing Ljubljana, where I found everything very beautiful. /Nika Oven/