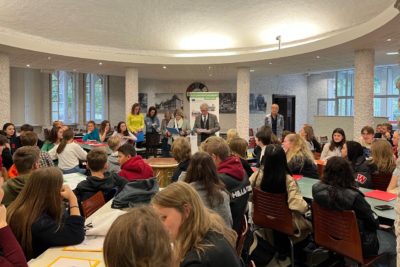 The meeting of partner schools participating in Erasmus+ KA2 project Futur€nvironment took place from 25th – 29th September 2022 in Mortefontaine, France. The hosting school was Institut Saint Dominique, with the following schools enjoying the hospitality of the French: Mallinckrodt-Gymnasium from Dortmund, Germany, which is the school coordinator of this project; Sint-Jozefscollege from Torhout, Belgium; SUGS Georgi Dimitrov from Skopje (Northern Macedonia), Wellington School, Ayr (Scotland) in St. Stanislav’s Institution with eight students and two teacher representatives, namely Alenka Battelino, Teacher of English and project coordinator, and Martin Čokl, teacher of physics.

This is how the Slovene students report on the event: 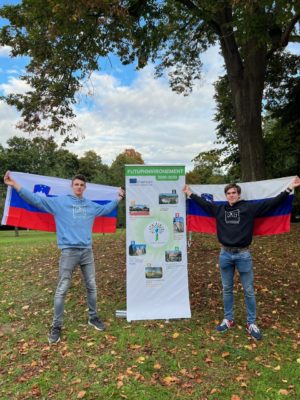 The morning after our first night abroad, we awoke in the pleasant safety of the homes of our hospitable French families. Then we ate an authentic French breakfast, which woke us up and gave us strength to start a new day. When we gathered in the dining room of the Institute of St. Dominic, we enthusiastically told each other about the first evening experiences. The program began with a speech by the headmaster of the Institute, while he greeted us in French, we were able to follow his words with a help of a translator. A pleasant coffee break and snacks followed, after which we started with the workshops. The activities were environmentaly themed. After those, the mayor of Mortefonataine addressed and welcomed us into the village community. This was followed by a delicious snack. After finishing we parted again and spent a pleasant evening with our friendly host families. /Rok Lekse, Filip Jeseničnik/ 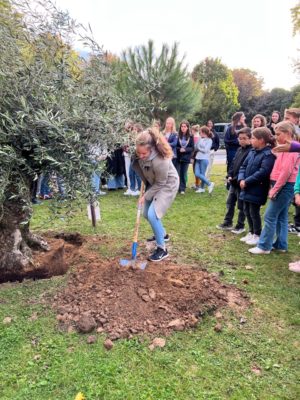 The day began at Institut St. Dominic where the bus took us to a very special self-sufficient farm. There, we saw many different animals – pigs, a cow, chickens, ducks, sheep, goats, and two donkeys … Firstly they told us about the history of the farm, how they grow their vegetables, and take care of the animals. They also offered us their homemade fully natural apple juice and different fruit jams. Then the tour of their orchard and vegetable gardens followed. It was very interesting to learn that their farming techniques and products were completely natural – meaning they don’t use pesticides or chemical sprays. After the tour of the farm, we had some lunch and then went to the famous Paris.

Paris welcomed us with traffic jams, beautiful architecture, people from all around the world, and a very complicated language for us. From the bus, we could see Montmartre, The Eiffel Tower, L’Arc de Triomphe, L’Obélisque de Louxor, Place de la Concorde, La Défense, and Notre Dame de Paris. We also rode down the beautiful Champs Elysées, where we could slightly feel the city’s atmosphere. Then followed the guided tour of the Orsay museum where we admired the world-famous paintings and sculptures. After the museum, we strolled down the Parisian streets, took many photographs, and even crossed the Saine. This diverse day finished with some more traffic jam and a beautiful evening with our hosting families. /Lucija Kremžar, Klara Lesnik/ 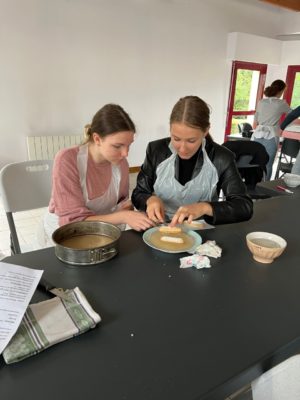 On Wednesday morning at half past eight, we gathered in the school dining room. We walked to the school hall, where Mr. Claude Lambre had a presentation about food additives contained in European foods and their dangers. After that there was a short coffee break and some snacks. We continued with workshops and attended the one called Life is still beautiful, where we met the art teacher Kathleen Ryan, who stuck precious stones over the moldy parts of the fruit. We glued glitter depicting mold onto preprepared styrofoam shapes. After the workshops, there was lunch, during which we chatted with students from other countries and had a little break. Before the start of the second part of the workshops, we took pictures with students from Belgium, Scotland, Macedonia and Germany. In the second part of the workshops, we baked a cake – Charlotte. Charlotte is a type of cake that can be served both cold or hot. Ours was made from apples. It was special because we actually used the whole apple, since we made syrup from the peels. After finishing the second part of the workshops, we took photos again, this time our hosts, the French pupils, joined us. Then, we all planted an olive tree together, to which everyone contributed a shovelful of soil. This was followed by a ceremonial presentation of awards for participation in the project. Then the celebratory dinner with a dance took place in the dining hall. At dinner, we were most impressed with the desserts. Among others, we were also served the cake we made at workshops. After dinner, we moved the tables and chairs aside and continued our evening of dancing. At about ten o’clock, after a beautiful and full day, we headed for the homes of our hosts. /Veronika Marc, Jerca Brolih, Lily Schweiger Kotar/